The SMVA(soundcity music video awards) has come and gone
The event was very well planned, loved the fashionshow, wonderful stage and good models except they kept repeating dresses, quiet colourful with loads of lovely lagosians young, starry, happy people and celebrities on the red carpet but as usual african timing it dint keep off till past 11pm. Nice opening performance by PSQUARE, , then others like SASHA, WHIZKID, BANKY W, R2BEES, ASA(wooooow she was electrifying on stage) and lots other artistes.

That Expo hall is very massive and it was filled to the brim infact i only realised how big that hall was when i went on stage with Charles Novia(prolific movie producer, writer and director)  to present the award category of '(HIT PRODUCER OF THE YEAR AS USED IN A MUSIC VIDEO)' won by SOSSICK, the producer of  late Dagrin pon pon pon video.  ...... 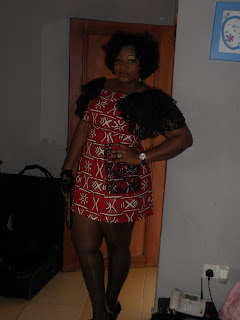 I was almost caught up on stage fright and it just made sense to me that there is a gr8 difference between camera shoot and stage...... (mynextpointofcall) ie. STAGE plays
Posted by adaora ukoh at 07:56